In PART ONE we learned how to use a note or two over a short chord sequence: the ubiquitous, overused but necessary ii / V.* We selected our note(s) from a short list of pitches that sound consonant in relation to BOTH of the chords. We essentially ignored the harmonic "changes" as a first step towards improvising with confidence.

Now we are going to choose pathways that specifically indicate which chord we're improvising over at any given time. This is much easier than it sounds, because these particular chords - ii and V - are very closely related to one another. In fact, there's only ONE note that has to move (or change) when we toggle between these two harmonies!

* Don't worry about the meaning of ii and V if you don't get that yet. It will all become clear in a moment.

Rather than get into a theoretical explanation, let's get right to PLAYING what we'll call TARGET TONES. Instead of taking one or two notes through both chord changes (as we did previously) we're going to choose what note to "land on" when we get to each chord change. Let's use the one note that MUST shift when we move from back and forth between ii and V.

In the key of C, we will play the note C on the ii chord, the first chord in the repeating sequence. On the V chord, we'll play the note B.* That's it. Try this using the same backing track we used in PART ONE.

ii V in C
That works pretty well, doesn't it? If you got messed up and started playing the wrong note in relation to the chord, that sounded pretty sour, didn't it? Here's why:

Let's name and dissect these chords so we can see how the notes C and B relate to their respective harmonic contexts. In the key of C, the ii chord is D minor seventh (notated as D-7 or Dm7 or Dmin7). We call it a "ii chord" because D is the 2nd note of the major scale that starts on C. D-7 contains the notes D - F - A - C (root, minor 3rd, perfect 5th, minor 7th - ALL minor 7th chords have this structure).

SO - The note "C" is the minor 7th of the D-7 chord; and the note "B" is the major 3rd of the G7 chord. Take a look at the example below to confirm this (because I might be lying, you never know).

*Bb and Eb instrumentalists: you can easily transpose these notes by now, yes?

The first measure shows each full chord. I've dropped the root "G" down an octave to show you that the notes "D" and "F" are present in the middle of both chords. In measure two I've eliminated those "common tones" (and the irrelevant note "A"*). The arrows are showing you how the notes "C" and "B" relate to the roots - again, the "C" is the 7th of D-7; the "B" is the 3rd of G7. In the 3rd measure I've gotten rid of the root and put the "F" back into the mix. You'll see why that's important very soon. Finally, I've notated just the moving note that you experimented with a few paragraphs ago.

In a sense, then, this movement between "C" and "B" DEFINES the chord change! That's why they're called TARGET TONES. I have to confess that I told you a little white lie earlier. There is actually one other (very important) movement that defines the chord changes: the ROOT of each chord. If you move from the "D" on the D-7 to the "G" on the G7 that will give you a very clear sense of one chord changing to the other. I left this root motion out not because you can't use those notes, but because it is normally the job of the bass player to define the chord changes using root motion. Using the roots as the melody notes in your improvisation isn't wrong; it just might not be all that interesting.

*"A" is the perfect 5th of the D-7. It turns out that, because 5ths are present in almost all chord types, they don't help us to understand how the harmony works. Take this on faith for now, OK? 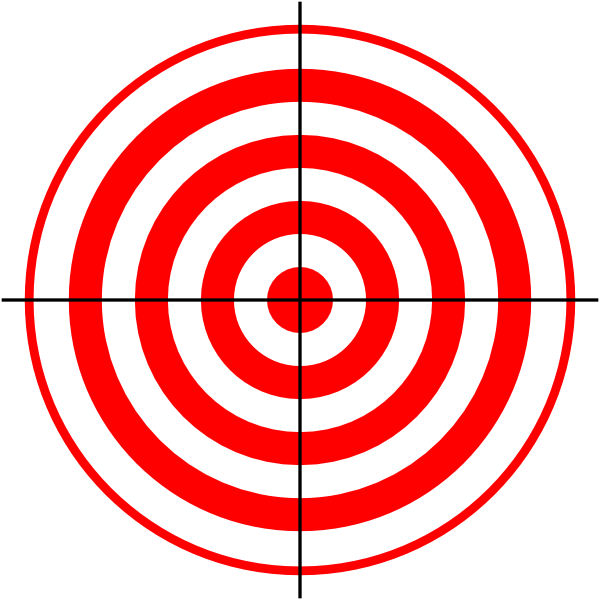 Let's take this one step further. I've hinted at the importance of the 3rds and 7ths of chords, so it's time to be more specific about this. To make this possible, we're going to use a longer sequence of chords (there's only so much you can get out of just ii and V in this regard). The chord progression is:

Now we have a complete turnaround, having added two chord changes (I and VI) to the original progression. Let's skip the chatter for a moment and PLAY some TARGET TONES through this set of changes. Here's the melody to start with:

Here's a play-along track to use for this turnaround in C:

TIME OUT FOR A QUIET CHAT ABOUT 3rds and 7ths

Put down your horn for a second because we need to have a quick harmony discussion. After the root, the most important notes in any chord are the 3rd and 7th. Why? Because those two notes establish the QUALITY of the chord, and therefore transmit a lot of essential information to you, the improviser. Have a look at the following:

This example shows how 3 chord types, all using "C" as the root, are constructed. In the bass staff we have the notes "C" and "G", the root and 5th. You can see that they do not change as we change the quality of the chord. In the treble staff we have the 3rd and 7th of each chord type, C major 7th, C dominant 7th and C minor 7th (notated above each chord). You can see that the chord quality is determined by the type of 3rd and 7th in each chord. If you want to sound like you know what you're doing as a jazz player, you MUST (at the very least) know the ROOT and QUALITY of the chords you're improvising over. So grab your instrument and let's play JUST the 3rds and 7ths through the progression we've just started working with.

Notice how the 3rds and 7ths connect to one another by STEPWISE motion as you move through this progression. Now's the time to start improvising using this specific motion as your TARGET TONES. Experiment with the ORDER of the notes in each measure (since I've only notated the pattern 3 - 7). Feel free to use whatever rhythms occur to you. Embellish the notes however you like but, as always, HEAR IT BEFORE YOU PLAY IT.

In case you misplaced it, here's that backing track for the turnaround:

ii V I VI in C Confused (or more curious) about JAZZ CHORDS? You're invited to take a few minutes to view our FREE JAZZ CHORD SPELLER VIDEOS. We made them to help you HEAR and VISUALIZE all the chord forms we use in jazz.

There's no clearer way to "play the changes" than to literally play the chords AS a melody. You can do this in a variety of ways: 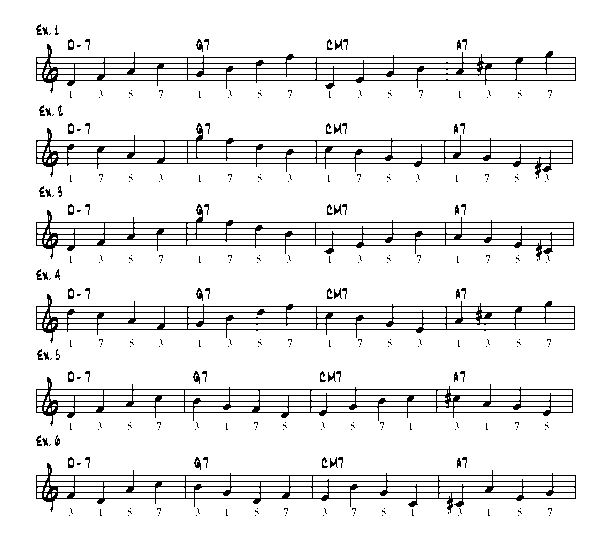 To save you an exhausting trip back up the page, here's that play-along track one mo' time:

ii V I VI in C You can get a lot of mileage out of this simple technique. The beboppers certainly did!

As always, you'll want to do this in all 12 keys. This 4 bar turnaround occurs, in various guises, in a huge number of standard tunes. Mastering it will go a long way towards helping you internalize the jazz tradition. Think of it as a springboard to the development of your own personal musical language.

You can purchase backing tracks for the ii/V/I/VI chord progression in All 12 Keys HERE.

Go HERE for more info on getting some individual help with your improvising.

← ← ← GO BACK to PART ONE Donate to PlayJazzNow! Yes, this is a business. But we have had people ask what they could do to help us keep the site growing (beyond buying some tracks and spreading the word about our products). If you feel the urge, throw us a few bucks. Thanks!

DONATE (You set the amount, of course)