Duke Ellington defined the essence of mainstream jazz with the title of one of his best-known compositions. So far in PART 1 and PART 2, we've mostly discussed pitch (ie, note choice) and have given very little attention to rhythm or what jazz players call "time feel". Many musicians would argue that time feel is far more important than pitch, and they certainly have a valid point. But it is difficult to start working with the various aspects of rhythm without having some idea of what notes to use when you're working on this vital musical component. Either way, it's about time we started talking about TIME.

Before we get too mired in explanation, let's try an experiment: We'll take a familiar tune, play it "straight", then introduce some jazz rhythmic elements and see if we can find out what makes the second version sound "jazzy". 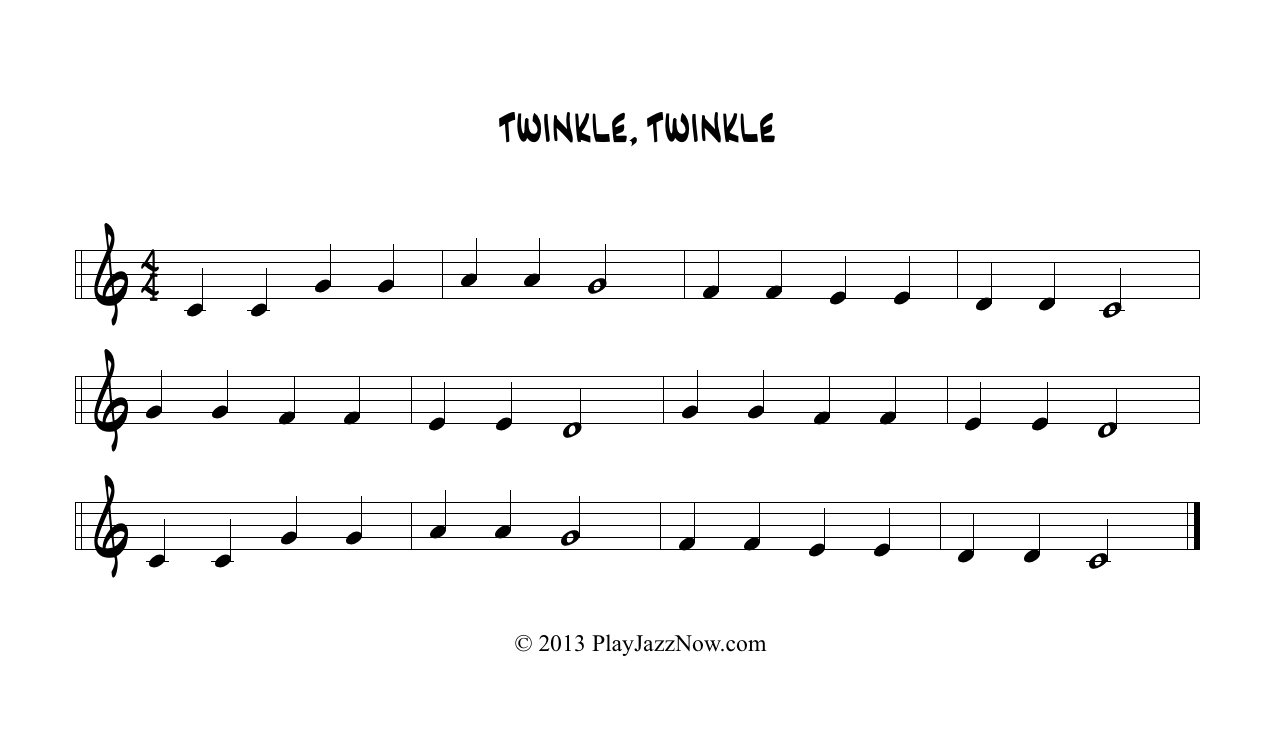 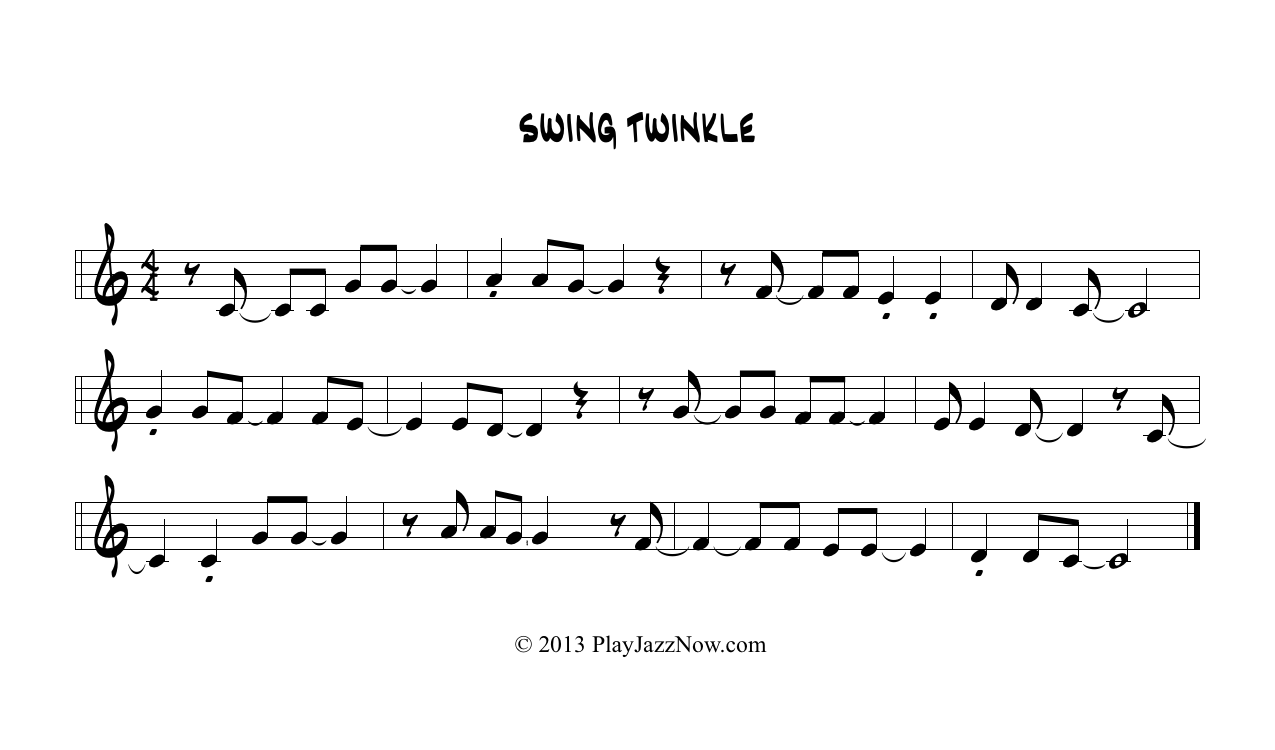 And now the "jazzy" version:

I suggest that you grab your instrument and play along with both versions, or, better yet, create your own swing interpretation of Twinkle. If you don't read music well enough yet, use your ear - this is a very simple tune played in the key of concert C (D for tenor sax and trumpet, A for alto and bari sax).

So why does "Swing Twinkle" feel more like jazz than the original? I added several typical "swing" elements: 1. SYNCOPATION is the displacement of the regular metrical accent created by stressing the weak beat (or part of a beat). In jazz, there are generally 2 kinds of displacement, anticipation and delay. The most obvious examples of delay occur on the "first beat" of measures 1, 3, and 7. In the "straight" version of Twinkle all of those entrances are right on beat one. But in the "swing" version, each one is delayed by an eighth note. The first of many examples of anticipation are in measures 1 and 2. The second "G" in the first measure is played on the "and of 3", creating the feeling that beat 4 comes an eighth note early. Likewise in measure 2, the "G" is played on the anticipation of beat 3. Look through (and listen) to the rest of the track and you'll hear these syncopations all over the place.

2. UNEVEN 8th NOTES. This is a somewhat complicated subject, but one that's easy to hear. Whenever there are 2 eighth notes in a row, they are played "long-short" instead of evenly. Listen for examples of this especially in measures 5, 6 and 7. The "feel" of the music (straight or swing) has a lot to do with how we subdivide (or split up) the quarter notes. Here's 4 bars of quarter notes with an accented sound on the first beat of each bar:

Here's what happens when we divide each quarter note into 2 equal (or straight) eighth notes:

The "long" and "short" swing 8th notes are performed by more or less tying the first two triplets of each quarter note together. The following chart shows how quarter notes may be divided into 2 and then 3 equal parts. The bottom system indicates the way in which the triplets are tied together, becoming, in essence, "long-short" as shown in the final measure. 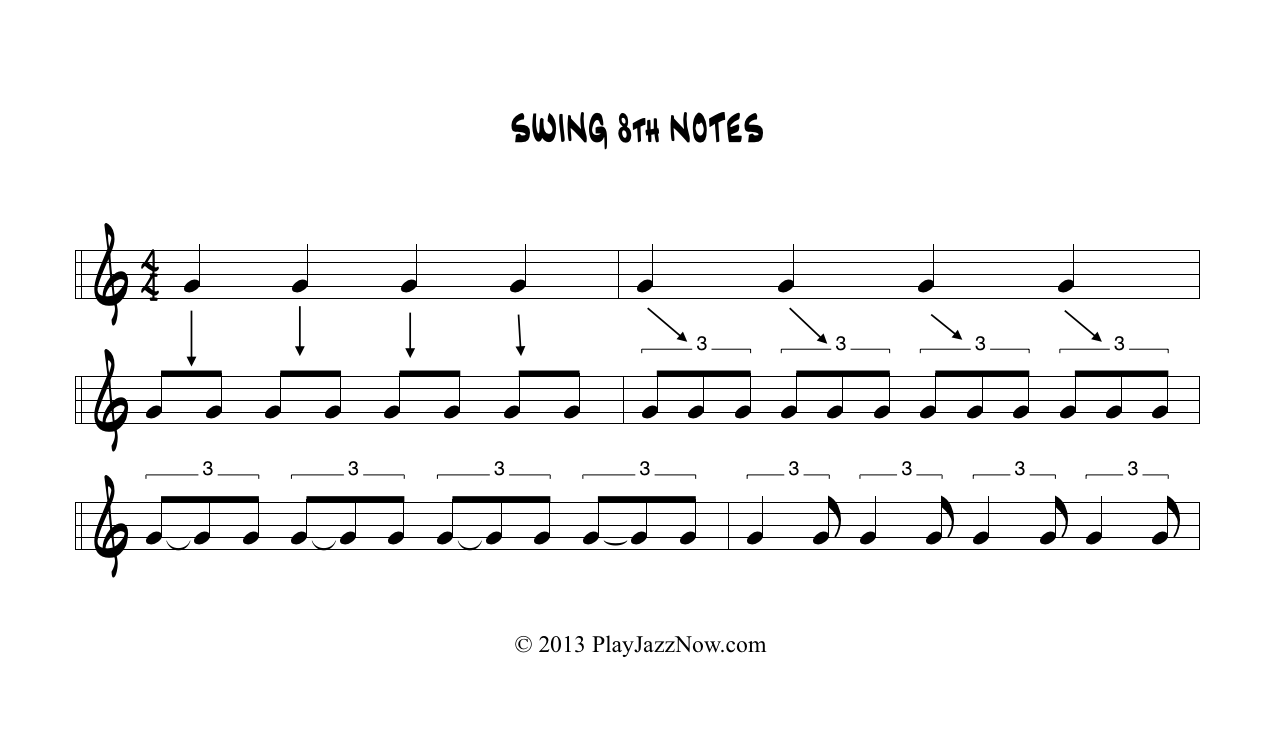 I say "more or less" because jazz 8th notes have been interpreted many different ways throughout the history of the music. It is also a somewhat controversial subject these days, because some musicians rightfully judge that describing jazz eighth notes as "tied triplets" is an oversimplification. For instance, musicians such as Miles Davis and Cannonball Adderley interpreted 8th notes in markedly different ways - and both of them swing like crazy. Making the 8th notes swing also involves note duration and accents, which we'll get into a little later.

3. EMPHASIS ON BEATS 2 AND 4. In general, jazz musicians feel beats 2 and 4 (sometimes called "backbeats") more strongly than beats 1 and 3. Listen, for example, how beats 2 and 4 are emphasized by the hi-hat:

Here's how the Swing Twinkle sounds with the metronome set on 2 and 4:

That feels a lot more "natural", don't you think?
You might want to pick another very simple tune (Row, Row, Row Your Boat? Mary Had A Little Lamb? whatever) and try jazzing it up by using swinging 8th notes, anticipations and delays, and putting your metronome on 2 and 4. If you prefer playing with a human drummer, here's a backing track you can use: 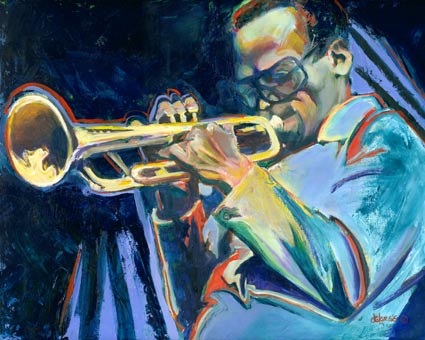 This next section gets a little technical. If you want to SKIP IT and get to the more practical stuff, CLICK HERE.

What is "time feel"? It is the totality of how musicians place the noises they make in relation to elapsing time. This totality has a few components: tempo, note placement, note durations, and emphasis (or accent).

TEMPO is the pre-determined, regular pulse of the particular piece of music, as interpreted by a specific group of musicians. The tick-tock of a clock or the incessant clicking of a metronome are both examples of "tempo" in the most basic sense. Set a metronome at 60 beats per minute and you will get a continuous, unwavering flow of clicks, one per second, until you can't take it anymore and shut off the beastly thing. Human musicians, however great their sense of tempo is, cannot "hold" a tempo that unwaveringly over the course of a several minute performance. The best players can come very close, but there will always be some slight variations of speeding up and slowing down. These variations might even be imperceptible to both the band and listeners, but it is undoubtedly present. However, the overall effect is of one steady pulse from beginning to end.

NOTE PLACEMENT is just what it sounds like: the moment in time when an individual musician initiates a note in relation to the tempo. Note placement happens continuously, unless the player is extremely succinct. Each time a musician creates a sound, the beginning (or attack) of that note happens in the context of the pulse of the music. Sometimes the pulse is stated, as when a soloist plays with a rhythm section accompanying. The pulse can also be implied when, for example, a musician plays literally by themselves without the use of any external audible context. A good musician can play with a good "time feel" in either case by using all of the elements of jazz rhythm well.

NOTE DURATION is simply the length(s) of the notes played. Every sound has a beginning and an end - what happens in between is the duration.

EMPHASIS (OR ACCENTING) is the relative weight of the attack of each sound the musician produces. This component includes volume (loudness) but also takes into consideration the attack of each note in relation to the specific meter of the music being played.

A musician is said to have good time or a good time feel if they're able to play with accurate tempo (ie neither speeding up nor slowing down), and can use the other elements of placement, duration and emphasis in a consistent, deliberate and stylistically appropriate way.

What is stylistically appropriate for mainstream jazz? That's where the element of swing enters the picture. 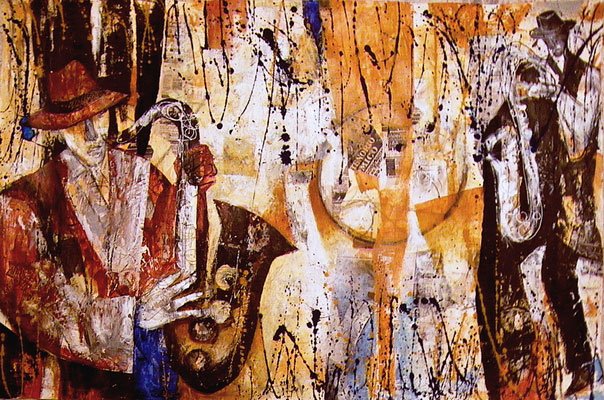 We've already discussed the technical meaning of swing 8th notes. But what is the musical effect we're attempting to achieve? Trying to define swing is like trying to pick up an individual snowflake with a pair of tongs. It is the most elusive of all musical terms, yet every experienced musician (and jazz aficianado) knows it when they hear it (or, more precisely, feel it).

The Jazz In America glossary defines swing as "when an individual player or ensemble performs in such a rhythmically coordinated way as to command a visceral response from the listener (to cause feet to tap and heads to nod); an irresistible gravitational buoyancy that defies mere verbal definition." Swing is that propulsive feeling sometimes called "groove" or "pocket".

Here's a pretty good Wikipedia article on the concept of swing.

sample
Now here's a straight 8th (not swing) drums track at about the same tempo:

sample
How about another one at the same tempo, this time a groove called the bossa nova: GETTING YOUR TIME FEEL TOGETHER

So, how do you improve your time feel?